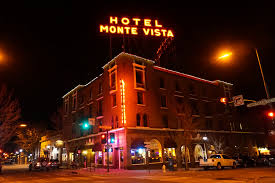 The Hotel Monte Vista, located in the heart of Flagstaff, is more than just an old hotel.  Not only are there many stories to be told about the ghosts that haunt it, it is also part of the National Register of Historic Places.  Found on Route 66, it was opened on New Year’s day in 1927 and since then has many stories and fascinating facts behind it.

Once known for its hosting of famous persons such as, John Wayne, Bing Crosby, and Harry Truman, it also is the only hotel to ever be built entirely with public tax money.  A man by the name of V.M. Sulphur held a local fundraising campaign to get the hotel built.  The only downfall was it was built and opened during the Prohibition Era.  This however didn’t slow the hotel down from gaining popularity among the locals and those near by.  Ignoring all the prohibition laws the hotel ran one of the most profitable bootlegging operations and speakeasy’s known.

When the prohibition had ended and the times moved into the 1940s and 50s when Western films were taking off and began being filmed in nearby towns such as Oak Creek and Sedona, the hotel hosted many of the famous stars involved in the movie making.

Still late in 1970 three men robbed a Flagstaff bank close to the hotel and took off on foot to escape.  One of the men was shot by police but the robbers still got away.  To celebrate their new found money they stopped into the lounge at The Hotel Monte Vista to grab a drink.   Not knowing how bad the shotgun wound was on one of the trio the man passed away from his wounds right there in his chair enjoying his drink.  That was only the beginning of the ghosts that would come to stay at this charming historical place.

To this day some are still too scared to stay at the hotel and thus make other arrangements when visiting Flagstaff..  However for those that are brave enough and do stay at The Hotel Monte Vista, they are in for a treat.  Built beautifully and well maintained, it is a place of elegance and class. Even if you may not be staying the night at this Flagstaff relic, stop in and enjoy a cocktail at the Hotel’s lounge.  See if you hear the calls from the lonely ghosts yourself!

Whether you are looking for energy vortex’s and beautiful scenery in Sedona, or anticipating   a history lesson and excitement from a haunted historical hotel in Flagstaff, one thing is for certain the state of Arizona has so many awesome towns to explore!